I got a text message on Friday asking if the CCP (Caring for Cancer Patients) group could meet and make more hats.  I said how about Sunday.  So, today at 1:30pm 5 members came.  I was delighted to see some young men too.  I had full confidence that once they saw the knitting machines they'd want to try them out and they did.  It wasn't so much the knitting part, but that a machine was doing the knitting. 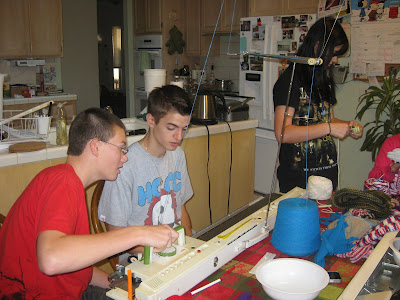 Today's session wasn't quite as fruitful as the first meeting.  It wasn't the kid's fault.  I had brought out my most reliable standard gauge machine this time as my extra bulky is now hooked up to my ribber.  My friend Julia and I discussed at the last meeting that it would be easier for them to work on bulkies.  I didn't have the sponge bar finished on the donated machine that is a bulky.  I'm kicking myself for not getting it done in time.  So, we had one standard and one bulky with which to work.  I wasn't worried as this standard machine works great and people are amazed when I bring it to class how well it works.
My reliable standard machine gave us nothing, but trouble today.  Within the first half hour I had 3 bent needles and 2 bent gate pegs.  It was easy to get it all fixed up, but why was my most reliable machine causing such havoc.  When it got to knitting it dropped stitches, looped yarn and just generally made a mess.  I'm so hoping they didn't get discourage.  I finally said we're not going to use this machine as it obviously needed some private time with me to whip it back into shape. 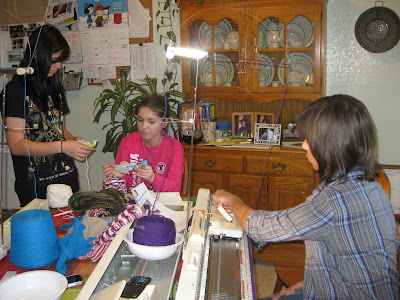 The bulky was working great and 3 hats were made on it.  Working with teenagers is both a joy and aggravation.  I don't know how many times I told the guys to quit putting their hands on the needles when the carriage was moving.  It wasn't until I jokingly said, "Watch out that carriage might saw your fingers right off" that any concern was shown.  I guess because they do kind of make a sawing sound it seem possible.  They like to flip levers, tilt handles and I just use it as a teaching moment.  Like don't pull out the russell levers unless you're planning on doing short rowing.  I asked, "Are you making socks today?"
The kids worked with making pom poms with the pom pom makers.  They wound yarn with my yarn winder.  There was plenty for them to do. 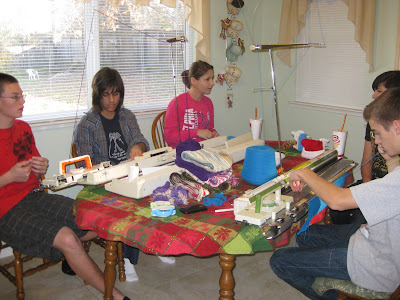 On top of it all the Yearbook photographer came out and took a few photos.  We all thought that was pretty exciting.  Me, because maybe machine knitting will show up in the yearbook!
Next time 2 bulky machines!
Posted by Lynne at 8:52 PM