Sorting Through the Machines

I've had several machines given to me over the past year and they are piling up.  I went for years with only the one given to me and the one I bought.  Then I was fortunate enough to have several given to me.  I was fine with my original set up, but was intrigued with the idea of playing with a garter carriage.  You know what that means?  I have to get a brother machine in addition to a garter carriage.  I was given a Brother 860 and 2 Brother 930s.  I was also given 2 93 garter carriages and one 89.  All in varying degrees of condition.  I was also given 2 disc drives for what I didn't know exactly.  My friend Bonnie was looking for a disc drive for her Brother set up and offered to come over.  She would help me sort out my mess of machines and decide what worked and what I should keep.

We decided the 860 was a punch card and I already have punch card machines.  I later found out through a chart on Daisy Knits that neither garter carriage was compatible with the 860 any ways.  So, good choice deciding to pass that machine along.  We plugged in the 930 I had set up on a stand and it worked!  I still need to clean it up and replace the sponge bar, but I didn't want to put all that work in if the electronics didn't work.

Next Bonnie went to testing the disc drives.  We found out neither worked.  They turn on and try and read the disc, but an error message comes up.  Bonnie had brought her 930 or was it a 960 along with a working disc drive that she wasn't sure she wanted to purchase.  She knew both worked great.  She tested my disc drives with her machine just in case mine wasn't working correctly.  Again error messages.  Then she tested her working disc drive with my 930 and it worked great and added a pattern.

By this time we were getting tired and decided to check out the garter carriages another day.  I'll get the 930 cleaned up by the time it's time to test them out.  Question now is which garter carriage to keep?  One 93 has no box, instructions, power cords and is in pretty rough shape.  One is pretty complete as far as I can tell, but is really dirty.  The 89 is pristine and looks like it was never used or taken out of the box.  I just need to figure out which works.
Posted by Lynne at 9:32 AM 2 comments: Links to this post

My traveling Toyota KS 650 got knocked over at a meeting a year ago.  It was just too twisted and bent to save.  I didn't want to give up on it.  It's been a year and I finally thought it's taking up too much space.  As I got my Studio 155 set up with ribber I realized I had gotten a new sponge bar for the knitting machine, but not for the ribber.  Light bulb!!  Why don't I take the fairly new sponge bar out of the Toyota.  It's time I thought to give up the ghost on that ole machine.  So, I got the sponge bar and finished setting up the Studio 155.  Then I began stripping all usable parts from the Toyota.  I got all the needles, the numbered strip, the tool box, and the carriage.  I asked DH to put the carcass in the trash for me.  Though not heavy any more it was just difficult to get rid of my first machine.

Looking forward to getting acquainted with the new to me machine.  Looks very much like my Toyota the learning curve I hope will be very small. 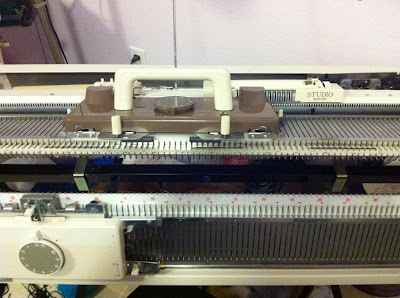 Wrestling with a Knitting Machine

I didn't win.  I got my Studio 155 back from the repair guy and was anxious to get it set up with it's ribber.  This meant taking down my Toyota 650 and ribber.  It had to be unearthed.  Patterns, yarn, tools and such were all over the place where it sits.  How on earth did I ever work with so much stuff around?  I finally got that place cleaned up and ready for the new machine.  I forget how heavy these machines are let alone the bulky machines.  This is a factor for me, because 17 years ago my neck was injured and lifting heavy items is not recommended.  Sometimes one just has to do what one has to do.

I got my newly refurbished bulky knitting machine on to the stand.  It was a wrestling match.  One side would swing off and I'd swing it back.  Then the other side would swing off and I'd hip check it back into place.  I broke a sweat just trying to get it clamped on.  Why was it giving me so much trouble?  Tightened the ribber clamps and decided that was enough for one day.  Stepped back and admired my "new to me" machine.  Then the whole thing flipped off the stand and on to the floor.

While cussing like a sailor I was trying to figure out how on earth did it come loose.  My hands were still throbbing from tightening the clamps.  Now I'm just mad, because I wasn't sure what damage had been done.  Using a tool and more hip checking and standing right in front of it I got it reclamped to the stand.  Now to access the damage.  I ran the carriage back and forth with many needle configurations and lever configurations and it seemed fine.  I do have 2 gate pegs wildly out of place though.  Frickety Frack!!

Will work on getting ribber on later today.  Wish me luck?  Maybe I need Hulk Hogan or The Rock here to help me.  They are more experienced with wrestling than I am.
Posted by Lynne at 11:10 AM 2 comments: Links to this post