I have to admit I wasn't really ready to start today. I was out at a Black Friday sale Thursday night at midnight, but was home by 1am WITH my item. Yahoo! I also woke up with a headache stemming from my finicky neck. Did a little too much something on Thanksgiving.

Anyhow that's what having a challenge is all about. One feels compelled to move forward and complete their challenge. I do anyhow. I have been thinking about Diana's Machine Knit Tam since I first saw her video. I didn't know how to do ribbing at the time. I do now. So, that's the first thing I wanted to make. 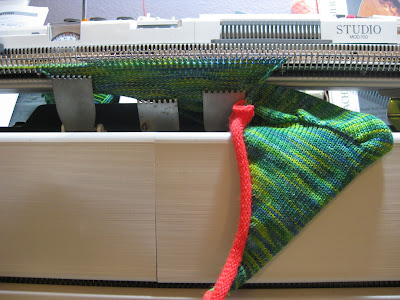 (First wedge done.  See middle weight not in good place.  Need to keep it high.)
I must clarify any problems I had with working with Diana's video is due to my own dorky machine knitting skills and working with my own machine.  Diana's video is great and teaches well.  I'm just kind of a clutsy machine knitter.  I seem to get my yarn wrapped around the gate pegs in one giant loop on a regular basis.  It is my own doing not Diana's.

I started the video and I had 2 problems. One is the end stitch the one put back into work each time I don't believe knits every time. It doesn't skip often maybe 2 or 3 times a triangle, but it's something I'm keeping an eye on. I'm not sure if I forget to put the needle into work. Don't think that is it. OR I've notice that needle gets pulled forward and maybe the stitch isn't knitting properly. SO I'm making sure that it is pulled back even with the other needles. We'll see if that solves my problem. 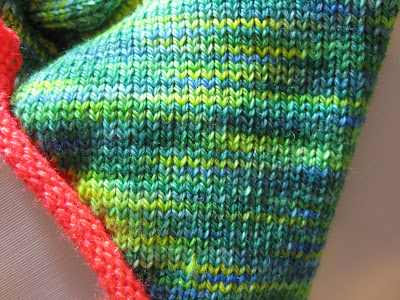 (Such a pretty color.  Wishing now I had practiced on something else.)
My 2nd problem is I'm not moving my middle weight up often enough. If I don't the middle section of my triangle won't knit. First time I noticed it I had 2 rows to fix. I've had to fix it 2 more time, but only one row. I can hear my carriage sounding different when it happens. That draws my attention to where the weight is. Then my attention goes up to the needles and sure enough about 10-20 needles are not knitted. It's a pretty easy fix. Also easy to avoid if one keeps their weights moving up!

With the 2 above observations and corrections it did solve my problems. 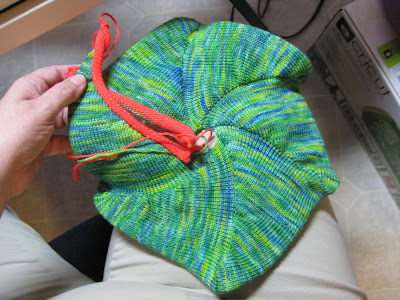 My next challenge was doing 199 needles of ribbing.  I've never used my full bed on any machine for any reason.  I was a bit nervous, but dove right in.  What I found out is my bad habit of stealing needles off the ends of my machines finally came back to bite me in the butt.  I was short 3 needles.  I do have replacements just had to quit being lazy, get them out and install them.  Done. 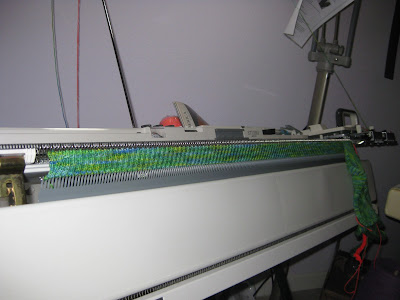 The tension for the ribbing was really tight.  Very hard to push across.  Next one I'll loosen that up.  I forced it across and somehow my ribbing turned out fine.  Next learning curve was attaching the hat to the band.  Turned out I had more stitches on my hat than my band.  I discovered it when I got to the middle and wedge three was going to overlap it by quite a bit.  So, I decided from this point on I'd hang the beginning and end of each wedge on 1/6th of the needles.  This worked out well.  I had to hang 2 stitches on one needle here and there.

Next I needed a refresher on the Kitchener Stitch.  Time for the Beginner Lessons Diana has made.  I watched Diana's video and a few others to stitch up the side seam.  It's not perfect, but I have to say it looks a lot better than I thought it would.  I do still need a lot of practice. 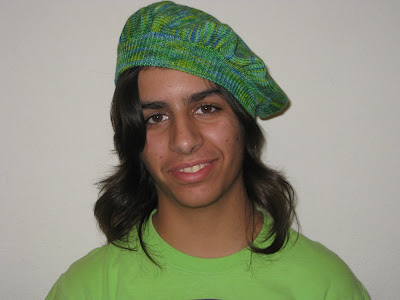 (My daughter always a good sport about modeling my creations.)
It took me 5 hours, but I completed the Tam and it is being blocked on a plate as I type.  What I decided on my "25 Days of Diana" challenge is I don't have to complete a project every day.  This project had many lessons in it that would probably do well to spread over a day or two.

Tam was blocked over a dinner plate.  Worked out quite well. 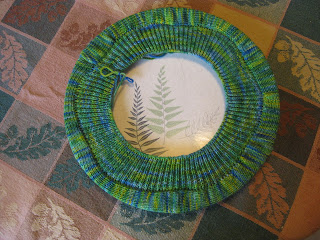 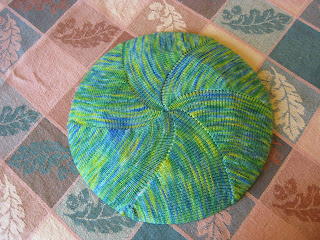