This is turning into a yearly thing, but ideas run through my mind all year.  The idea of covering this bench came to mind as my 2nd yarn bomb last year.  I finally had a chance with the 3 day weekend to bring this idea to fruition. 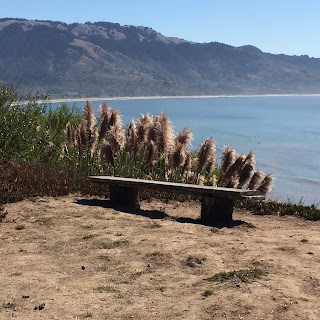 I told my husband I wanted to bring my knitting machine to the beach.  I heard some grumbling.  The kind you try to do for just for yourself, but sometimes someone over hears.  So, I asked what the problem was.  We were taking his car, which is a lot smaller than mine.  Lot better gas mileage though.  He said, "Now we're going to have to put my back seat down and poke your machine through there.  It's throwing the whole packing off."  I quickly grabbed my Brother 230 to show him, because I didn't think he knew how small it was.  Out bugged his eyes exclaiming, "It's so small."  Happy hubby again.  My project only required stockinette, so I knew this basic machine would do the job. 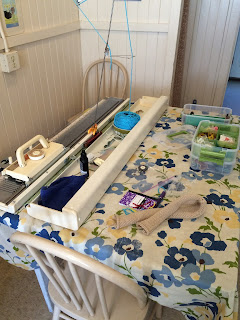 I grabbed all the worsted weight yarn that I had no plans for or had been given to me.  I knew I wanted a basic plain color for the background.  Then I figured I'd add colored stripes to extend the amount of the plain color.  I had no idea how much I would like the way it turned out. 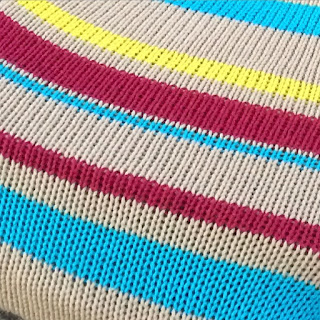 First 2 days we enjoyed our vacation together.  Evening of the 2nd day I measured and did a couple swatches.  The 3rd day confident of the size and my design I begin to knit.  Hubs loves having time to just sit and read.  While I knitted I did some grumbling of my own.  The wheels with the brushes on them on the arm kept causing a loop and jamming the carriage.  My friend Becky says to take those wheels off and never put them back on.  I'm always hesitant thinking they are on there for a reason.  What I don't know, but just like tonsils when they start causing a problem I take them off.  Slipped them into a snack baggy and put them in my tool box.  Just in case I find out what they are for and need them again.  Knitting was now a breeze.  I changed colors and rows as the whim hit me. 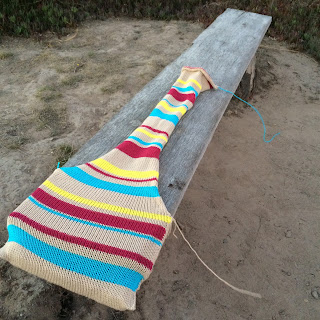 At one point I took it out to the bench to try it on for size and make sure I was on track.  Fruitful visit.  I liked the way it was going and found out I was halfway to completing the top.

I always think of yarn bombing as a sneaky thing.  Slip out and do it while nobody is looking.  This bench I thought was perfect.  I seldom ever see anyone on it or any where near it.  While I was trying on the above half hubby was keeping an eye out.  He saw someone coming and said, "Some one's coming!"  I finished a couple stitches and looked up to see who it was.  No one around.  I asked where did they go?  Hubs said, "I don't know maybe I scared them off when I said 'Someone's coming.'  Lord knows what they think we're doing out here."  We had a good chuckle.

The next morning we headed out to the bench to install my yarn bomb.  Before I get a needle out our new neighbor was at the bench, "Whatcha doin'?"  I basically tell her it's a secret go away.  She chuckled and left.  I taught hubby how to whip stitch and we both began sewing.  Before we know it we are being snuffled by a big dog in our faces.  Owner calls it off and says, "How neat" and keeps walking by on the path.  Next two men show up and are standing enjoying the ocean view and ignoring us and we do the same.  Stitching away.  A woman joins them with a dog on a leash.  I look up at her and she rolls her eyes.  OK someone who doesn't like yarn bombing.  There are a few out there.  She begins talking to the two men and they all take off.  Next a woman with a poodle and then a man on a bike go by.  I comment to my husband that I don't think I've seen this many people at the bench over the last 10 years.  He laughs and says, "Keep sewing the bus tour is going to be here any minute."

Back to stitching.  Sun blaring down on us.  Loving that I put on sunblock before coming out.  No joke about 15 minutes later a group of 10 people go hiking past.  They stop admire our work and the lead person tells the group she can't believe I've been out there all night working on the project.  Now I'm secretly rolling my eyes.  The group starts to leave and one member asks, "No really have you been out all night?"  I tell her no.  Chuckling about the "tour group" and I'm talking to my hubby he interrupts me and says with urgency in his voice, "Keep sewing maybe we can get this done before the Segway tour comes through."  Now I'm snorting with laughter, but I keeping whip stitching knowing this could quite possibly be true.

All total it took about 2 hours to get it sewn.  We were very pleased with the way it turned out.  I worried at first it would stick out like a sore thumb.  Instead it looks like a cozy welcoming cover. 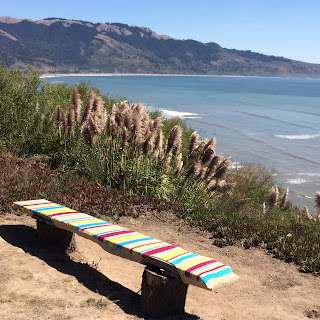 I'll be back next month and fingers crossed it will still be there and in good shape.  I am curious how it will hold up against nature, the weather and the tour groups. :D 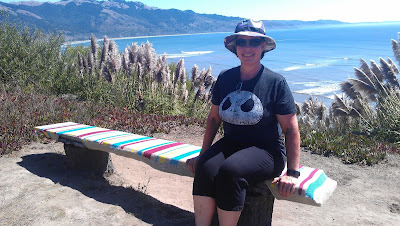 PS:  I went back a month later to see how it was holding up.  I didn't want a ratty tatty bench.  I was prepared to take it down if it was dirty or torn.  It was completely gone.  Not one scrap of yarn to be found.  It looked like a mafia clean up crew had been in to make sure all evidence of its demise was gone.