My trainer left for a week in New York and I knew it was a perfect time to yarn bomb her.  Several things had entered my mind over the past year.  She loves her Raiders and I love my Niners.  Thought I might yarn bomb her with Niner colors, but thought that would be the shortest lived yarn bomb.  Then thought out of respect for our friendship and in the name of fun I'd give her what she'd want... Raider colors. 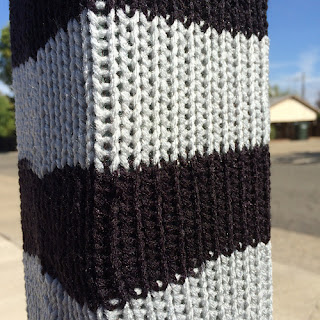 What to yarn bomb?  Why not the 4X4 post of her mailbox.  I took a measurement trip to her house.  I knew she had a neighbor watching her house, but who?  As I was measuring I saw a guy with a big ole truck and a big ole Raider's sign on the truck and thought that's the neighbor.  Of course he's home on a weekday while I'm out messing with the mailbox.  I knew then I'd have to install this yarn bomb at the last minute, because if he saw me he'd text my trainer.  He'd tell her some crazy lady is messing with your mailbox.  That's his job.

I went to Joanns to get the Red Heart's team spirit yarn.  I knew it would have the right team colors and make it easy.  WHAT?!  Joanns had every team BUT the Raiders.  Poutingly, I walked around the yarn section trying to come up with plan B.  When I walked toward the Team Spirit display from another angle I could see 2 skeins of black and silver buried in the back!!  Yahoo!!  I dug in and got them.  That's all I wanted 2 skeins.

Came home and began swatching to get the size I needed to wrap around the 4X4.  I borrowed my parking block from the garage, which is a 4X4.  That was handy getting the right size, which reminds me I need to put that back in the garage before I hit the hot water heater.

Began my knitting nothing fancy just stripes of black and silver. Knitted it to the length I wanted and planned my day to install.  I knew what time she was coming home and planned to install that morning.  Hoping her house watcher was at work and wouldn't notice the yarn bomb.  It's a dude it could happen. 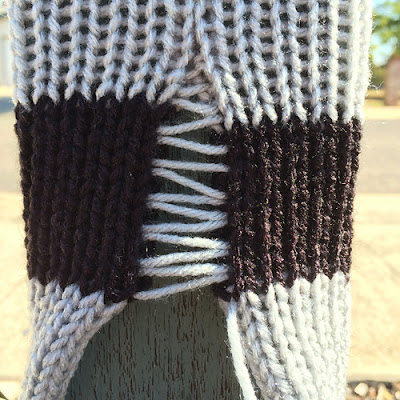 As luck would have it he was at work.  Took about an hour to install as I wanted to mattress stitch it neatly and match up the stripes.  I wanted it to look good from all angles.  After I was done I neatened up the bark around the mailbox and thought the whole thing looked really nice and FUN! 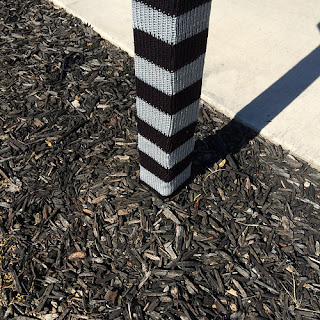 My trainer got home and immediately noticed the mailbox thinking it looked like it leg warmer on it.  She loved it AND had no idea who had done it.  What what?  About 6 hours after getting home she texted me, "Did you yarn bomb my mailbox?"  I jokingly sent back, "It took you 5 hours and 59 minutes longer to figure it out than I thought it would."  She laughed and texted back, "Girl I'm sleep deprived from a week in New York and the red eye."  OK you're excused. 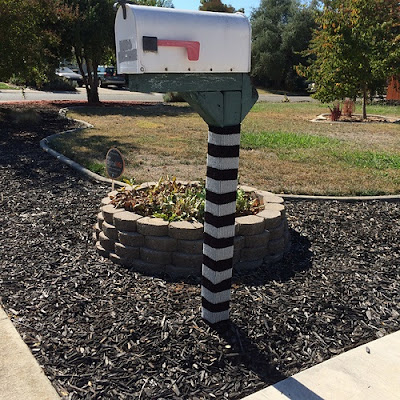 She loves it!  I told her after football season is over I'd come over and take it down.  She loves it so much she's going to leave it up until it's ready to fall off. 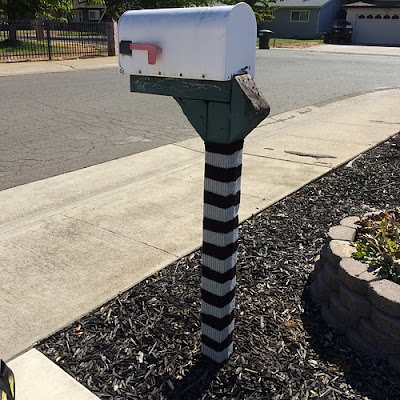