49er Silly Hats On The Bulky

I bought some Red Heart yarn last year called Team Spirit.  This was the Burgundy/Gold combo that made me say "49ers!" when I saw it.  Then like most fiber artists I forgot all about it, but when the 49ers made it into the Super Bowl I thought "where's that yarn."  Fortunately, it popped right up in my craft room.
My first thought was to try the Beanie on a Bulky pattern now that I have a working ribber or so I hoped.  I took my Toyota KS 650 set up down last year as I couldn't figure out why the ribber stopped working.  I got a Studio MOD.155 and ribber for a song off Craiglist.  The machine has been cleaned, tuned and new sponge bar ready for over 6 months, but just never used the ribber.
Since my last Beanie on a Bulky was a bit big I decided to reduce the number of needles in work to 80 and of course it threw the count off on the instructions I had.  I learned a lot doing this pattern a 2nd time.  First off my ribber works great.  Secondly, using my garter bar for doing the decreases was really hard at first.  STEEP learning curve and a bit of what I found out was loud cussing I was able to operate the garter bar for decreases. 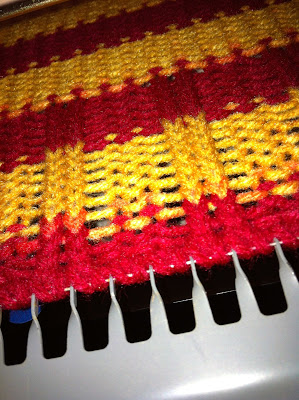 Disappointingly the ribbing wasn't stretchy.  Could be the stiff Red Heart yarn?  Could be that the ribber doesn't do quite as nice ribbing as done by hand.  Don't get me wrong we loved the hat and wore it until the end of the Super Bowl and then some.  I think my daughter still has it on today as she wouldn't return it to me.  I was going to put it away until next football season. 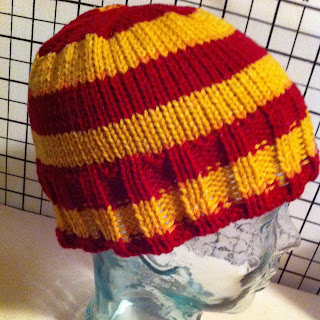 I still had over a skein left of the Team Spirit yarn left and thought why not try and make one more hat.  I wanted to do something that had a completely different look than the first hat.  Something that would show off the color changes.  I really liked the idea of Diana natters on... Short-Rowed Baby Hat.  Could doing it on the bulky make it an adult sized hat without having to do many changes to the pattern? 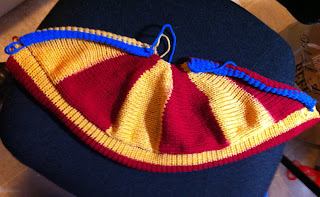 I cast 26 needles and proceeded just like she says in the video.  When I got to 8 wedges done I measured the hat and thought it would fit.  BUT Each color represented 2 wedges of short rowing.  I would have had to Kitchener a gold wedge to a gold wedge and I didn't like the idea of what that would have looked like.  I didn't like that there would have been a large gold blotch on the back of the hat.  So, I did 10 wedges like Diana's video said to do.  I've been asked did I plan the color changes on the hat?  What kind of math did I use to get the colors to turn out so perfectly.  I'd love to pretend I was that clever in the planning of this hat, but honestly this is how the colors can right out of the skein.  Even I was surprised the color came out this way.  Fortunately, I just love it. 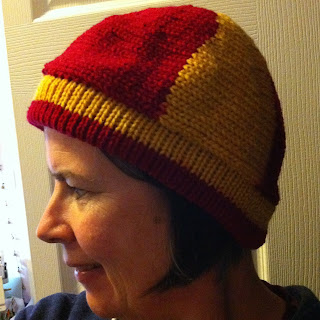 The band for the hat was 80 needles. I knitted 24 rows no picot edging, because we ain't no babies. :D 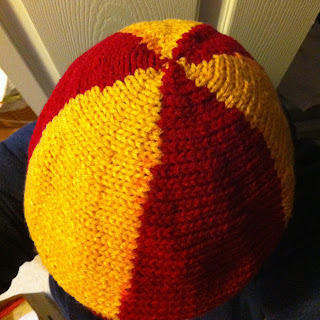 My daughter liked the design and made suggestions on what to do for a 2nd hat.  So, my experiment was a success.  I got to thinking today of a hat I think was Diana's hat.  Kind of a beret.  Will have to look around.  I'm computer challenged today and running out of battery power.


I'm back and powered up.  It was Diana's Tam.  Not quite the shape I'm looking for at this time, but if you do a search of her site you'll see a lot of fabulous Tams with variegated yarn.
Posted by Lynne at 3:37 PM