Knitting Again with the Knit Leader

Felt so good to machine knit today.  It's been a very long time.  Our Sacramento Guild was having a lesson on Knit Leaders.  I've seen them used, but have never used one.  I have one built into my machine for gosh sakes I should find out if it works and find out how to use it.  Carolyn gave a great explanation.  I didn't know I had to have a swatch, but we decided to use her swap and pretend it was mine.  That way I learned out to measure it and how to use the stitch guide, the rulers, the patterns, and the built in knit leader.  I should look up in my manual what exactly everything is called.  I brought the wrong manual to class.  Fortunately, Carolyn has my exact machine at home and knew how to use it.

Here I am all set up.  I just did a small portion of the pattern to get an idea of how it worked.  I did from about 2 inches below the arm hole shaping on up to the neck line.  It really worked out great.  Not a lot of thinking needed to be done with the knit leader in action.  It told me where to decrease and what needles to do it on.  I found it quite fascinating. 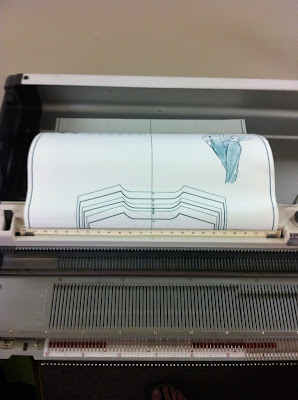 Here's my little sweater experiment armhole.  I was quite impressed.  I also loved this little gizmo Carolyn's husband made her.  I'm talking about the board that is under my knitting.  It is a piece of wood with a piece of sandpaper glued to it.  It was too terribly rough, but had enough traction that when you lay a swat or in this case my sweater experiment it holds the knitting out rather than it rolling.  I liked that I could see what was going on without having to block it.  It's just an experiment and I will be unraveling it.

It felt so strange to be knitting.  My cast on and cast off skills were definitely week, but by hour 2 I was feeling like a pro again.  Time to knit myself a sweater. 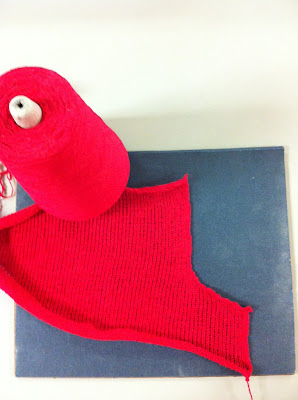