Working on completing my Christmas gift for my mother.  I'm making her a Hollywood Swag Cap.  You've seen me do several of these already starting with this one.  The link to the pattern can be found here.

I've done a couple things different things with this hat.  Rather than e-wrap to begin I did a few rows of waste yarn and then hung my hem for the hat band.  Was it easier?  No.  Did it look any better?  No.  In fact for some reason I had the most difficult time getting my weaving cast-on to work correctly tonight for the blasted waste yarn.  E-wrapping would have been easier.
I added an extra row of the wave pattern before starting the decreases.  I wanted the hat to have a little slouch to it.  I really do like the extra room it gave.

I also decided that I wanted to do another cast-off other than the latch tool bind off.  I didn't like the look of the bulky edge under the brim.  Although once the hat is on I've found it's not a factor.  It's only bugs me when it's in my hand and I can see it.  I decided to use Diana's Lesson 12 Loop Through Loop Bind Off.  I really liked the simplicity of this bind off, but it didn't necessarily give me a smaller edge between brim and hat.  The thing it did do that is going to be inconvenient is both tails of yarn are on one side.  I need these tails to sew up the ends of the brim.  Not a biggie, but something to think about. 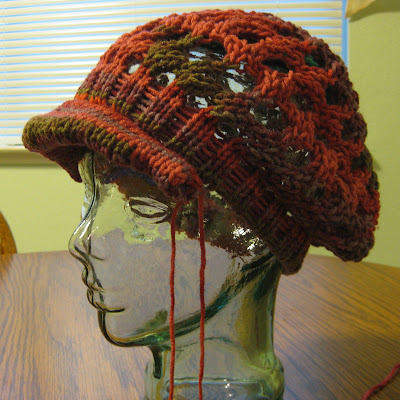 Finally, I need a lesson in short rowing and when to wrap a needle.  I'm ending up with some bulky loops and I'm afraid it's because I just don't know when a hole will be formed and when not.  I think I'll need to experiment.  That will be a good lesson for my completion challenge. 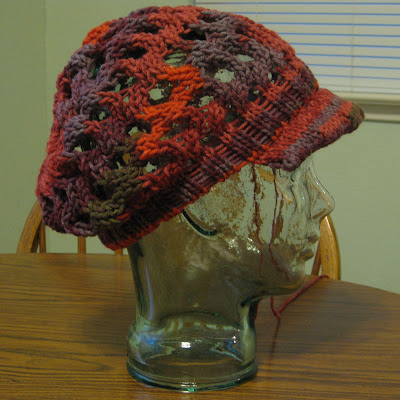