SOCKS!  That was the theme of the meeting.  What shocked me was the interest.  The mere mention of machine knit socks usually scares people, but obviously not us here in the Sacramento Area.  There were 13 people at the meeting and 7 machines set up. 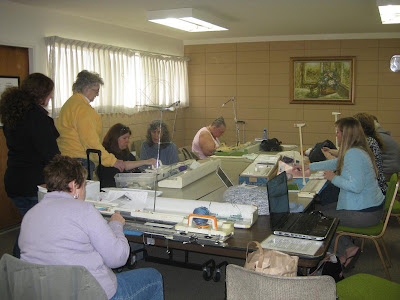 I had brought one of my standard machines and of course it was the one that has no tools.  Made a note to do something about that.  When so many machines started coming in I thought just as well put it away and let another machine get set up. 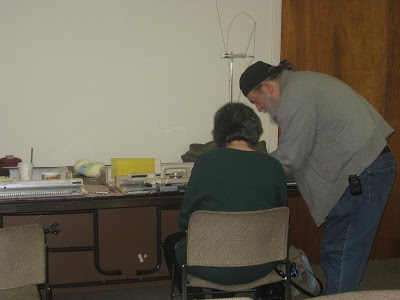 Marilynn called people and told them to make some ribbing on needles and bring it in.  I knew that most people wouldn't want to or know how to do this.  Only Marilynn and Kathleen... OK me and Julia too came with ribbing.  Mine and Julia's was made with our knitting machines and ribbers.  Julia had brought machine knitting supplies and sock yarn to sell.  I decided that since I had made 3 whole socks that I would help.  :)

Thinking that a few would not have ribbing I brought my laptop in so we could view Diana's Single Bed Sew-As-You-Go Sock.  With it's mock rib option it came in handy.  Erica with Becky's help made Diana's sock.

Kathleen with her ribbing made the sock pattern Marilynn brought in.  I just roved around teaching, learning and just watching.  I really enjoyed myself.  I thought it was a great meeting.

Not everyone worked on socks.  3 knitters were there to learn the basics like how to get their machine working.  Been there done that!  One knitter had her machine working and was learning the e-wrap cast-on and how to cast-off.

What I learned was I needed to figure out my tool situation with my machine.  Should I buy tools?  I have standard tools with another machine.  Should I use that set with both machines?  I really had a big problem sort of robbing one machine to use with another.  So, I quizzed the machine knitter's over at Ravelry.  The consensus was "pool the tools."  Many have a tool box with standard and bulky tools separate, but in the same box.  Though I still have some guilt about doing this it really makes a lot of sense to me.  Why buy more tools when I have a lot of great tools.  What I've decided to do is label with a Sharpie which tool came from which machine in case I ever want to put the tools all back with their machines.
Posted by Lynne at 9:19 PM