My daughter and her friend have a club at school called "Caring for Cancer Patients."  I machine knit a lot of hats to donate to cancer patients through the year.  I thought wouldn't it be a fast way of making donation hats if they learned to machine knit.  I got to thinking wouldn't it be interesting to have a day invite the club over and teach them how to make a simple hat.  It really is the simplest of projects on a knitting machine.  Knit a rectangle then sew it into a hat.  I have 2 bulky machines.  We'll set a goal depending on the amount of hours they want to spend.  I can have 2 knitting and the rest sewing up the hats since that takes longer.  Then have everyone switch off jobs.  They'll learn to machine knit, they'll learn the mattress stitch and they'll learn how to gather.  They'll learn setting a goal and achieving it.

If only one of them shows interest and some time in their 20's thinks I'd like to machine knit that will be a bonus.

In addition to learning how to machine knit they'll have hats they've made themselves for donation for their club.  I'm hoping they'll love that feeling of accomplishment too.

I haven't gotten the club over yet, but the other night I was cleaning and refurbishing my latest machine.  To test it out I knitted a quick little hat.  My daughter and her friend were watching a movie.  As I walked past the living room on my way to the craft room I tossed the hat at them to look at.

I was on my computer when my craft room door opened.  It was 11 pm and I thought my husband had woken up.  He had laid down for a nap earlier and you know how that goes.   Nope it was my daughter and her friend.  They both stood in front of me with a giggly expression and my daughter blurts out, "Diana wants to knit a hat."  My daughter has knitted a couple things and is learning to cast on and cast off.  She probably told Diana no problem we can knit up a hat really quick.  It was 11pm, but they are out of school now, so I thought why not.  They are here.  They are willing.  My evil plan can begin tonight.


After she picked out some yarn; I went ahead and cast on and then let Diana do the knitting.  As she knitted I told her what to look for, how to hold the carriage, how to make sure everything is knitting properly each row.  Told her to keep an eye on the row counter.  It really was a crash course.  She hung live stitches to make the brim.  She threaded a needle with a long tail through the last row.  She then learned the mattress stitch and stitched the hat up herself.  As she was stitching the seam she asks, "Can we write something on the hat?"  It's approaching midnight now.  I'm thinking any other mother on the planet would have said no, but I just happen to know how to embroider.  I did it a lot as a teenager.  I knew I could do a quick little back stitch and it would look fine.  So, I said yes and she wanted me to write "SMILE" on the hat.  It was for a 5 year old cousin of a friend of hers.  By midnight the hat was complete. 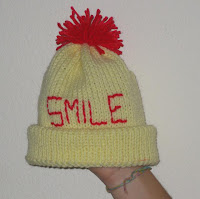 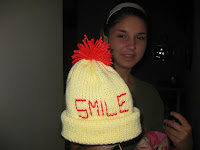