Sorry for the long time between posts.  After my ribber gave me heck I needed to take a break from it.  I had an afghan I had been working on during football seasons the last couple years.  Since the 49ers were doing so well this year I had it nearly finished when they didn't go to the Super Bowl.  OH well, the 49ers played a great season and I couldn't be disappointed they didn't go to the Super Bowl.  With that great attitude and not caring who won the Super Bowl I decided to go ahead and watch it.  I wanted to see if I couldn't get that last 10 inch done on my afghan.  I didn't finish it during the Super Bowl, but I was close.  I kept crocheting until it was done. 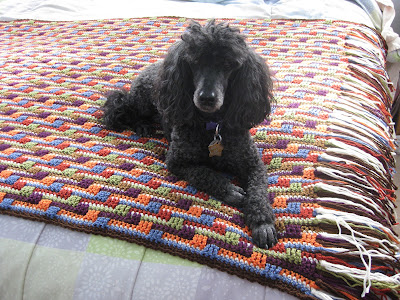 Now if I can get my poodle to share I'll get to enjoy it. :)
What I did machine knit was a bust, BUT it opened my eyes to new possibilities.  I've been wanting to make a Dead Fish hat for several years and the pattern just looked too complicated for me.  What I found out was it was difficult to understand, but not complicated.  Using my trusty Toyota Bulky, sans ribber, I went to work on the machine knit pattern for the Dead Fish Hat.
Why was it a bust?  Well, the decreasing and increasing to get the fish shape happen on both sides of the knitted piece.  EXCEPT when you fold it in half to sew up your fish hat all the increases and decreases end on one side.  One ends up with a wonky fish hat.  One ends up with one straight side and one curved side.  A knitter on Ravelry solved this problem by moving the face and fins to center on the straight side making it the top of the fish.  The curved side was now it's belly.  Though it looked like it worked out fine for her.  I really didn't like the idea of the fish lips (can't believe I just said fish lips) being on the sides of the mouth. 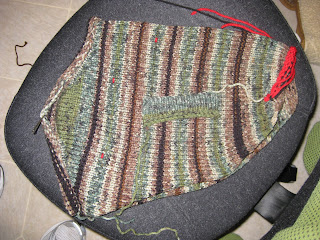 What I did like was the yarn.  I decided that trying to make this work wasn't something I wanted to do.  I decided to frog it.  I'm going to make it in 2 pieces.  That way the BOTH sides will have increases and decreases and my fish lips will be in their proper places!
Posted by Lynne at 9:05 PM