Knitting For A Dog

My brother and his wife have a pup that rides around in his kennel every where they go.  Not to say he spends his whole day in the kennel, but when it's not appropriate for him to be out like at restaurant he's in.  Yes, my brother and his wife are those people.  I guess I'm one of those people too in that I don't mind a bit if they bring him.  I don't bring my dog hardly any where, but I'm a homebody.  We're usually home together.  My brother when questioned at a restaurant says it's his gym bag.  Amazingly, he's very quiet and hasn't got us kicked out of a restaurant yet.

Anyhow the comfort of Winston the dog came into question when my SIL would come to my brother's work to pick up Winston at the end of the day.  She would find Winston laying in his kennel with his comfy towel balled up at the back of his kennel.  SIL would get agitated that my brother wasn't smoothing out his towel when he messed it up.  Despite my brother reminding her “he’s a dog I’m sure he’s fine the short amount of time he spends in the kennel.” (Winston has a pacemaker, so naturally she worries.)

To ease his wife's mind and to get him out of the dog house :) my brother asked me if I could make sort of a knitted fitted sheet like piece to go over the bottom plastic insert of the kennel.  He gave me the dimensions.  I picked an acrylic yarn which could be washed if need be. I knitted a swatch washed and dried it to get an idea of what size I needed to make. 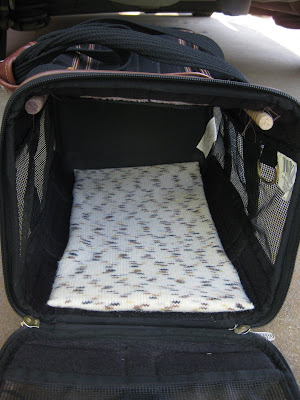 I knitted a rectangle that was slightly longer and wider than the plastic insert.  It was then sewn to resemble a fitted sheet.  It slips over the plastic insert and Winston can't scratch it up and kick it to the back of the kennel. 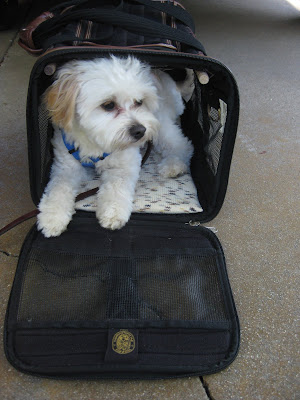 As you can see Winston and my SIL are very happy with the results. 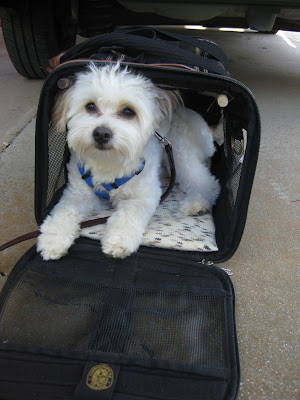 Winston is a Poodle/Pomeranian mix.
Posted by Lynne at 7:11 PM