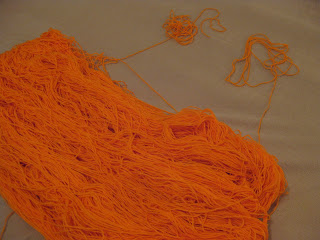 It's laying on my bed looking all innocent. Ready for winding. Not a tangle in sight right? Not the case. This skein has turned into nearly something of my nightmares. I've had many a tangle skein that within an hour or so was finally rolled into a big manageable ball. Not this skein. I show 2 ends in the photo, but right now we have 4 ends. I say we as in my daughter jumped in on hour 2 convinced it wouldn't be that hard.

I have my arms slid into the skein and she weaves the small ball in the making in and out and round about the skein. Not one round has just freed itself easily. Every round is a puzzle. It reminds me of computer cords or stereo or even TV/DVD cords. Someone is out front pulling on the cord. Someone is in back looking and feeling for the wiggle, so they know which cord is in need of help. That's the way it is with this yarn. I feel the pull on my arms and guide my daughter as she untangles each and every wrap of the yarn. Some knitters I have spoken too think I have knots. Nope. Not really any knots just yarn woven so intricately around itself that one cannot get it to unwind with out a fight.

I personally had decided once hitting hour 4 and still having one ball of yarn about the size of a ping pong ball to throw the whole thing away. The skein was given to me. It cost me nothing. It's very cheap yarn not good enough to make something wearable, but I was going to make some knitted Trick or Treat bags. It's a gorgeous color of jack 0 lantern orange.

My daughter caught wind of my plan to throw it away and she vowed to get it untangled. I said I'd throw it away when she was at school. She begged me not too. She said, "Mom you don't want to enlarge your yarn footprint!" We both laughed. I would really like to recycle this yarn that was given to me, because someone else didn't want it. BUT life's too short for tangled yarn too. We'll see. I'll give it a little more time.
Posted by Lynne at 9:20 PM